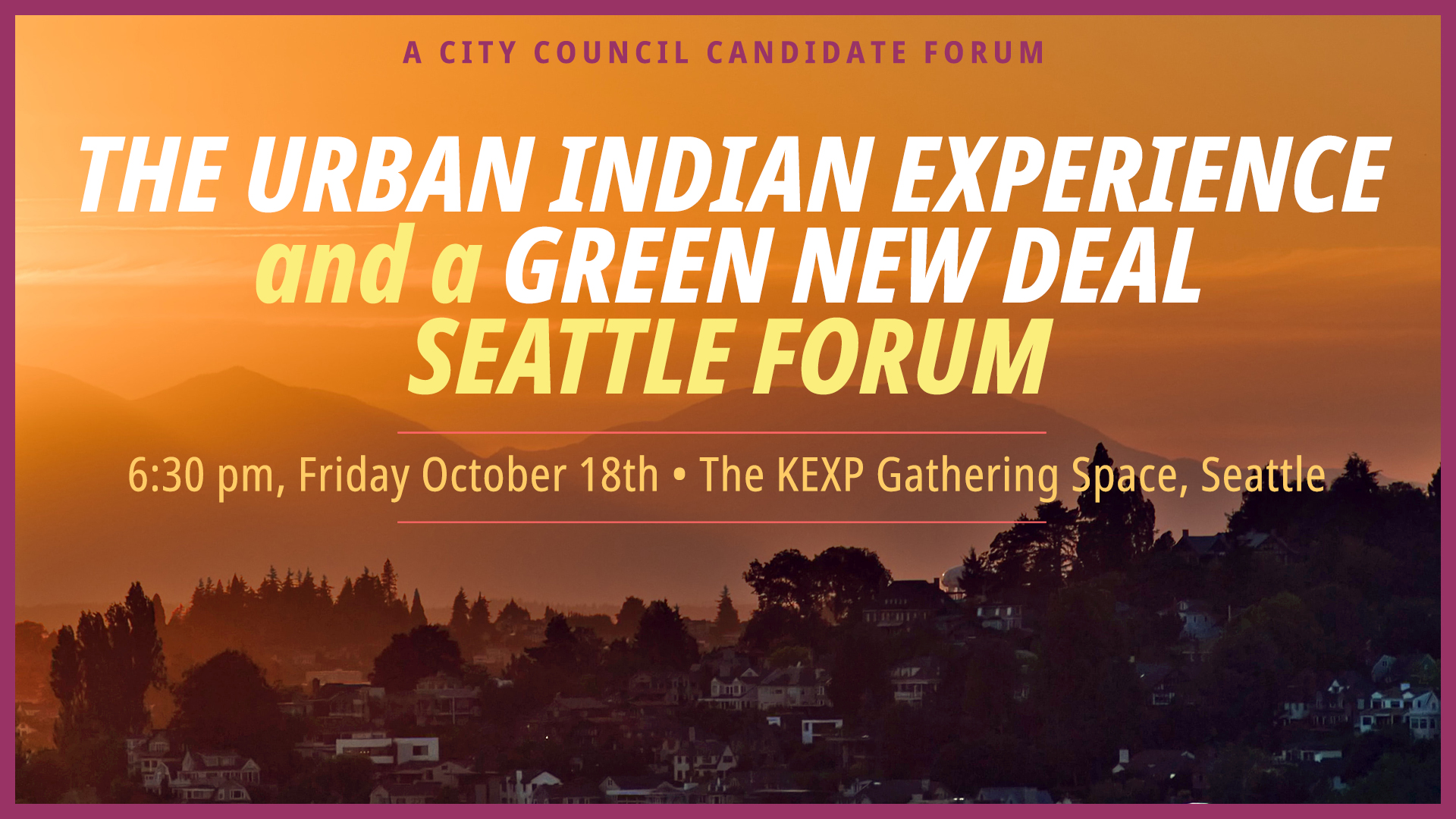 Please join us for a combined forum about the Urban Indian Experience and What a Green New Deal Means for Seattle from 6:30-8:30pm on Friday, October 18th at KEXP.

All Ages, Bar / valid ID.
Must RSVP to attend. RSVP does not guarantee entry.
Event is partially seated.

Two coalitions have come together for a first-of-its-kind City Council forum focused on the critical issues facing American Indian and Alaska Native residents in Seattle and what a Green New Deal means for Seattle.

Native communities have long been at the forefront of the response to the climate crisis. When we discovered that our two coalitions had planned Council forums on the same night, October 18th, we decided: let’s broaden the conversation. Nationally, we’ve seen native communities at the forefront of leadership and direct-action on the climate crisis and in crafting Green New Deal policies.

Seattle is home to over 5,000 native residents, less than 1% of the population, yet the community faces significant disparities. American Indian and Alaska Native residents make up 10% of the homeless population. Native babies are twice as likely to die before the age of one than white babies. At the forum you’ll hear questions from the urban Indian community about issues that affect their lives – from addressing disparities to creating a voice at the table.

Due in part to the leadership of native communities, the national conversation on the solutions to address the climate crisis has transformed over the past year. The Green New Deal has challenged us to imagine climate action at the scale of the crisis, and embrace solutions that reduce pollution and create millions of jobs and healthier communities for all.

Here in Seattle – where climate impacts are on the rise – local groups are not waiting on the federal government for action. As the result of a successful Seattle Green New Deal organizing campaign, in August, the Seattle City Council passed a Green New Deal resolution which lays out commitments and pathways to eliminate the city’s climate pollution by 2030, address historic injustices, and create thousands of good, green union jobs.

The next City Council will be responsible for implementing many of the policies called for in the Green New Deal resolution. As a result, this Council will have an outsize role in Seattle's climate future: will they continue business as usual? Or will the next Council lead Seattle to rise to the climate challenge?